The Greek online supermarket – Home & office delivery across the UK

About Us |Blog| Wholesale 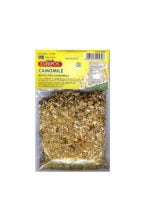 Chamomile flowers grow everywhere in Greek mountainous locations. Chamomile raw branches should be placed for 10min in boiling water. After you strain the boiling and chamomile water you get chamomile hot beverage. Chamomile has a light and fruity aroma and flavour and used as “medicinal” beverage. It is enormously popular in Greece, and used most often in winter when levels of physical activity decrease and colds, aches, and pains increase. It is said to have a positive effect on almost anything that causes illness, most notably, it is used for colds, respiratory problems, digestion, the immune system, mild anxiety, and as an anti-oxidant. Available in 30 gr packets by Evripos.

There are no reviews yet.

Only logged in customers who have purchased this product may leave a review.

We use cookies to ensure that we give you the best experience on our website. If you continue to use this site we will assume that you are happy with it.OKPrivacy policy